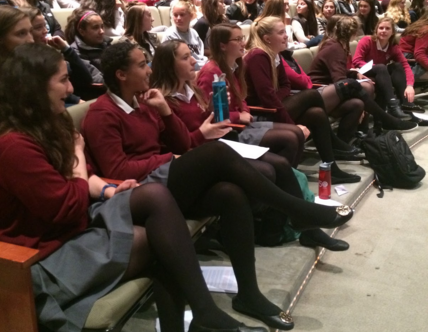 Student Council Body candidates wait their turn for speeches while seated at the front row of Syufy Theatre in dress uniform. Results were announced today at 3:33 p.m.

Standing center stage behind the podium of Syufy Theatre, Student Body Council candidates gave speeches and showed promotional videos during this morning’s assembly, sharing their qualifications for positions and goals for the upcoming year.

“I decided to run a long time ago, and reading the description of vice president qualifications, I felt that was the job I wanted to do,” elected Vice President Lisabelle Panossian said. “I remember hearing my friends talking about changes and how they felt they weren’t being listened to. As someone who works to understand all sides of an argument and finds a working solution, I want to bring student voice to the council.”

Winners of the election were announced today at 3:33 p.m. after an online voting period through Google form that ended at 1 p.m. Along with Panossian, the council will consist of President Katie Newbold, Secretary Dot Wetmore, Treasurer India Thieriot, Publicity Charlotte Cobb and Activities Ally Arora.

“There were so many great candidates that everyone went in knowing it would work well no matter who got elected,” Arora said. “I am excited to go in working with all these people. Usually in past years, student council members in our grade have been the same people, and now it’s getting mixed up.”

Arora says she hopes to continue success from the Father Figure Dance her class organized this year, aiming for off campus dances and more activities between grades during her speech with running partner Cobb.

“One of my goals as publicity is to make awareness of events more accessible,” Cobb said. “I like the idea of having a centralized bulletin board where all announcements can be made so there’s a physical and reliant source for all students to have access to.”

Other candidates’ speeches also went beyond their creative slogans to state plans for the upcoming year.

“Every time before we plan an event, whether it be a theme or funding or what type of food, I want to make a survey, so it’s all up to the students,” Panossian said. “Another major plan I have is to find ways to bring more enthusiasm to assemblies other than just announcements.”

Council members stated similar plans during their speeches to increase school spirit and begin immediate planning for the upcoming year.

“People always say, ‘We are going to start planning early,’ but what really matters is doing your research and convincing everyone that something is attainable even if it’s tough to do,” current Publicity Victoria Oestermann said. “It’s also important to delegate work but sharing the workload and helping out whenever is possible.”

Oestermann also advises engaging in group bonding to form a tight knit group that understands each other’s strengths and weaknesses, which made communication and teamwork easier this year especially when councils from both schools did not see eye to eye.

“At our meetings we will assign roles for projects that include our elected positions but also help each other to work as one team,” Newbold said. “As for the boys, we will have coed meetings before big events to make sure that we are all on the same page and neither council is doing more than their fair share of work.”