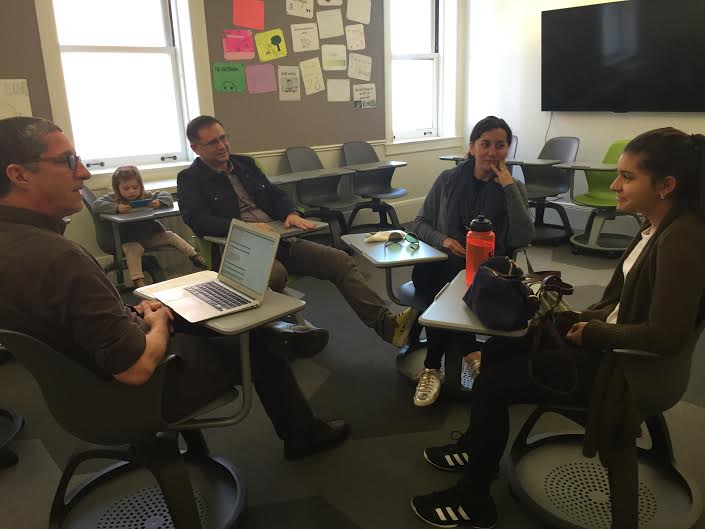 Sophomore Carlota Rubio, her sister and parents meet with her advisor Pascal Parra during Parent Teacher Conferences. Advisors met with their advisees throughout the day to discuss the third quarter.

Cancelled classes gave time today for the semi-annual Parent Teacher Conferences held throughout the school. Meetings gave students an opportunity to meet in their PAWS advisor’s classroom to discuss last quarter’s progress and goals for the rest of the year.

“Really it is for students to reflect on their learning process this year, challenges they faced and what they’re proud of,” Director of Student Life Devin DeMartini Cooke said.

Not only is the day meant for parents to meet and discuss their child’s grades, but for the students to look back on their success and needed improvement. The students already reflected on the past quarter for their conferences with their advisor in their weekly PAWS so they could lead the conferences, according to DeMartini Cooke.

“I think it’s great that they have those conferences towards the end of the school year it helps prepare them with maybe their class schedules for the next year,” Kimberly Leung, sophomore Annabelle Lung’s mother, said

During the conferences the fire alarm was pulled in the Herbst Gymnasium causing the alarm to be activated through the school. Students taking tests, teachers, parents and attendees of a career convention evacuated the building for thirty minutes until it was safe for the conferences to resume.

“It really was not inconvenience,” Thomas Harvey, senior Kendra Harvey’s father, said about his conference being interrupted. “It was good to see everyone immediately evacuate because it’s so important to get out of there, and it only caused a slight delay.”

The twenty minute conferences lasted from 8 a.m. to 4 p.m. Parents signed up for their conference through a Doodle document, an online form for scheduling meetings.