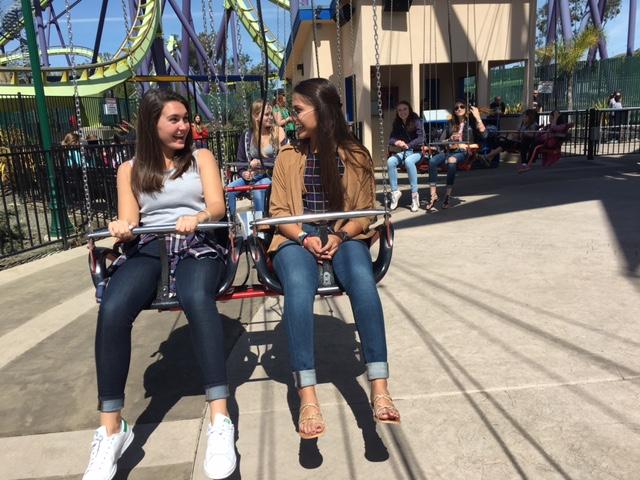 Seniors Alex Farrnán and Victoria Oestermann talk while waiting for a ride to start. Both seniors were part of the announcement of Congé.

Cheers exploded in Syufy Theatre as Student Body Council announced the annual Congé celebration with wristbands and confetti guns during a senior presentation.

“The girls’ Student Council put extra effort in our announcement because we know that’s one of the most exciting parts,” Student Body President Liana Lum said. “We ordered the custom wristbands and confetti guns ahead of time, and had a sleepover the night before to plan all the presentations.”

Most teachers did not know where Congé was this year and it was not announced to the Senior Class in advance, according to Lum.

“The Seniors this year did a really good job keeping the secret,” junior April Matsumoto said. “The Student Body Council did well with keeping everyone on their toes.”

Convent and Stuart Hall High School celebrated Congé together for the second year in a row.

“The purpose of congé is community,” Lum said. “Even though Congé is only one day, everything that the Student Councils have been doing, whether through Tpumps sales or dances, aim to create a closer environment of ‘Cor Unum.’”

Buses took students to Six Flags Discovery Kingdom, where they spent the day enjoying the park after arriving at the park around 11 a.m. and leaving at 1:45 p.m.

“It was really fun,” sophomore Hannah Taschek said. “I didn’t expect to go to Six Flags, but it was a really good surprise.”

Attendees could go on thrill and family-friendly rides and attend animal shows.

“Medusa was a really interesting ride,” Taschek said. “When I first saw it, I didn’t think it would be as fun as it was. I didn’t see how many twists it had but after I cried during the ride cause it was so much fun.”

Lunch was provided by the school through Six Flags, but students could purchase different foods sold by the park.

“All the girls on student council were aware of travel time,” Lum said. “We knew that even then there was still time for everyone to bond with friends and have fun.”