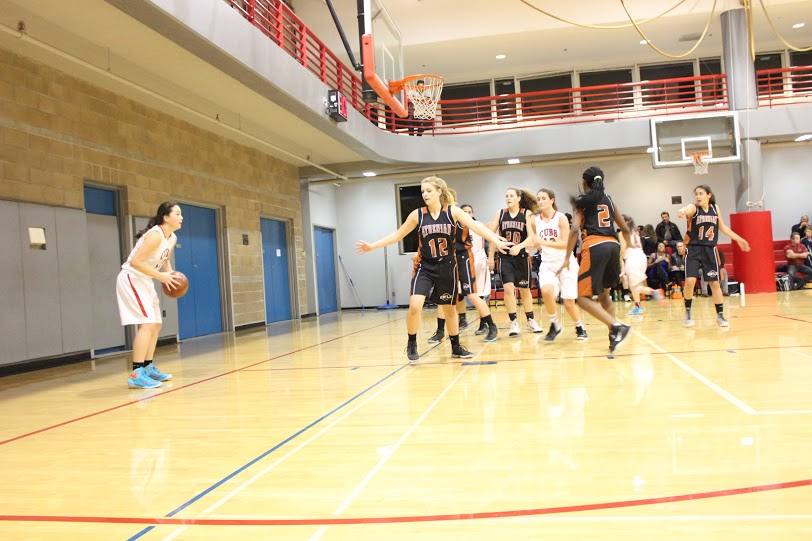 A small crowd did not stop the Cubs as they dribbled, scored and defended during their first round of the North Coast Section game, beating The Athenian School 44-28.

The team qualified after tying for third in the Bay Counties League West tournament.

“There’s a lot of team defense — like a lot of help defense,” co-captain Alex Farrán said. “There is no one person that doesn’t want to pass the ball to anyone else, which has been really new for us to year.”

Farrán says that this year’s team works well together, with the focus being on the team and not personal gains.

“It’s like your main goal is to pass it to your teammate who has a better shot over you taking a shot yourself,” Farrán said.

Starters Farrán, Ally Arora, Gia Monachino, Alyssa Alvarez and Isabella Armstrong have all been on the same team for the past three years. Watching the chemistry between these players builds community by seeing her classmates outside of the classroom, according to junior Delaney Moslander, who attended tonight’s game.

“I got to see them in their element and really doing what they want to do,” Moslander said. “If more people show up to the games then it will be even more fun, and there will be more support for the girls which will increase morale and improve their playing too.”

The next game is Saturday at 7 p.m. against the winner of the University High School and Upper Lake High School game, according to Athletics Director Elena DeSantis.

“It’s gonna be really tough because the teams get better and better,” Farrán said. “I think everyone on the team really wants it and is really excited.”