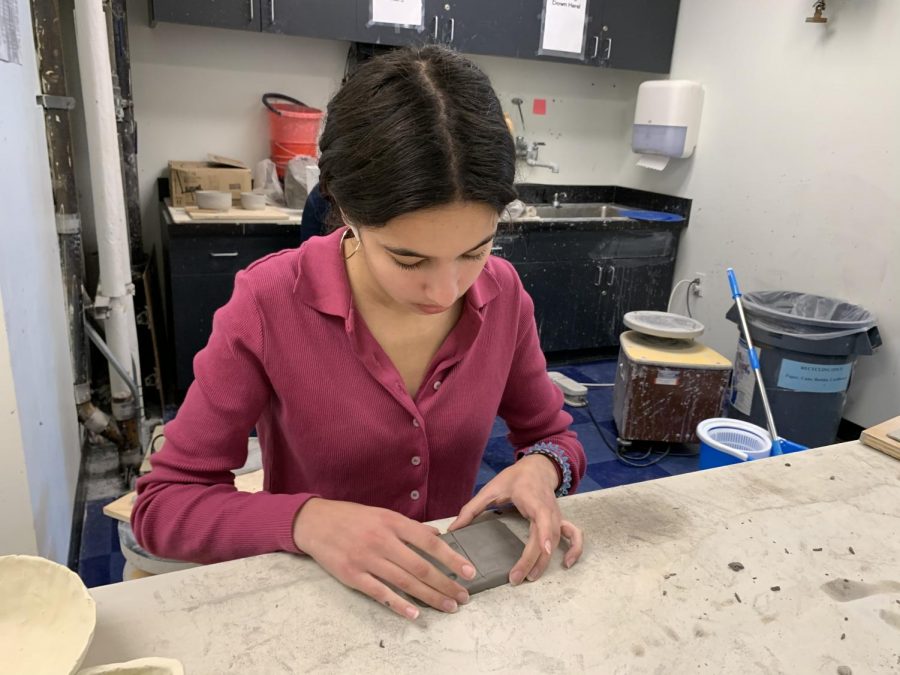 Sophomore Haya Jadallah creates a domino out of clay for her project that represents the domino effect of the contamination of the ocean. This Art Foundation II project pushes students to reflect the environment around them in their work.

Art Foundation II students are working on a project titled “The Line that Binds Us” as their first project of the year that involves the use of materials rather than research. The project is based on the theme of interconnectivity, where students are displaying how they are connected to their environment.

“I wanted students to look at the term of interconnectivity because sometimes we are so involved in our lives that we don’t look closer at events around us,” art teacher Malisa Suchanya said. “The goal is for students to be aware of what’s going on in the world, whether it’s natural or based on society.”

At the beginning of the semester, students focused more on research and writing where they each studied a different modern art movement and then wrote a compare and contrast essay discussing the differences and similarities of two movements.

“The reason for this project was to help students reflect on what they have studied this semester with their research,” art teacher Malisa Suchanya said. “This showed students how artists are influenced by their environment and how the environment is influenced by artists.”

This project was spontaneous and was originally supposed to be a project where students created a public art piece that would be interacted with by its viewers, according to Suchanya. Instead, the project was changed to mesh better with concepts students learned in the first part of the semester.

“For my project, I am drawing the stages of the contamination of the ocean on clay dominos to reflect the domino effect and how each event is connected,” sophomore Haya Jadallah said. “This project is really making me push past my boundaries and think outside the box.”

Students are utilizing a variety of mediums such as clay, acrylic paint, and spray paint, and many are mixing their mediums to give depth to the project.

“I am using multiple mediums in my project and I will also have an interactive portion,” sophomore Darcy Jubb said. “I am creating eyes from clay and then making large tears from cardboard and decorating the tears with different stereotypes, showing that everyone experiences them.”

The month-long project will come to an end on Nov. 14 when students will critique each other’s work.

“In this project I really wanted students to go deeper in their work, instead of composing something that is aesthetically pleasing,” Suchanya said. “This project hones in on the fact that the concept is the ‘meat’ of the artwork and not the aesthetics.”