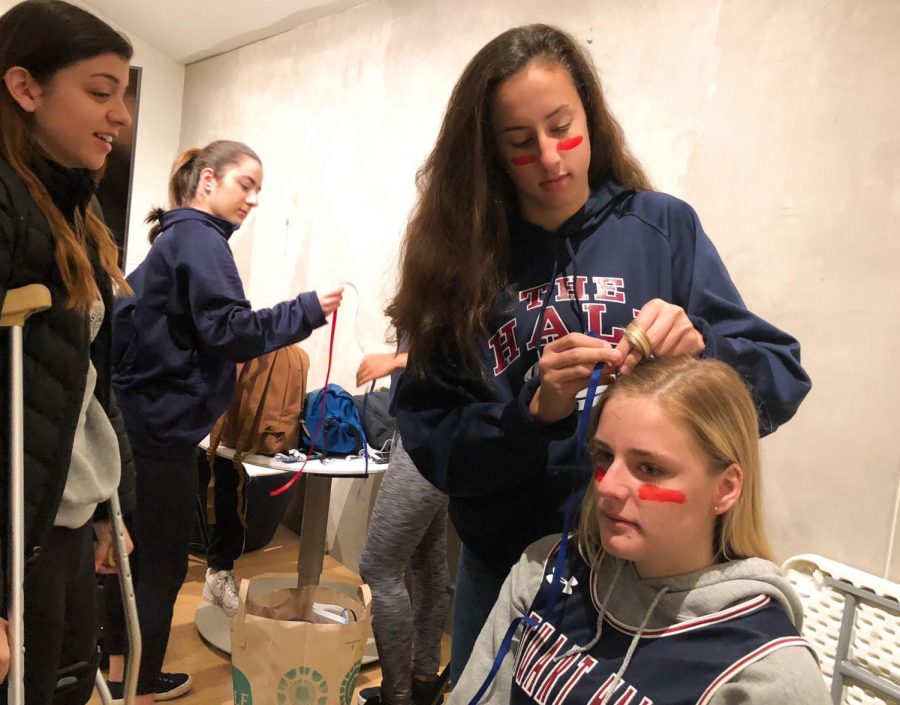 Sophomore Isabelle Thiara braids junior Grace Boudreau’s hair adding red and blue ribbon, the team’s colors. The Syufy Theatre was filled with the Knight’s colors and spirit before the game, as almost all students have some sort of accent in their hair, on their face or around their body.

After their win last Saturday at the CIF Northern California Regional Championship Game, meaning a chance for the Knights to compete for the state title, Tony Farrell, Stuart Hall High School’s Head of School, sent an email Sunday morning informing students and faculty classes would be cancelled for the game.

“This past week of school has been so exciting,” junior Rosie Larkin said. “The anticipation for Friday has gotten bigger everyday as students have been making posters, buying spirit shirts and getting more and more hyped about the game overall.”

Students were divided into busses by grade around 8:45 this morning after a short assembly where attendance was taken by class presidents.

Students this morning were especially spirited as the energy before the game reached its peak in the Syufy Theatre and on the buses, according to sophomore Isabelle Thiara.

“The bus ride consisted of a lot of pump-up music that got everyone even more ready for intensity of the game,” Thiara said. “Being stuck on a bus with classmates for two hours sounds awful, but it was actually a great opportunity for all my classmates to come together in excitement for the day ahead.”

Some teachers allotted time during the week leading up to the game to make posters for the championship game and create community spirit. History teacher Sarah Garlinghouse gave her IB and AP Art history classes time to make signs even though she only has one member of the team as a student.

“Because opportunities like this don’t happen every year, I decided that the best use of class time was to make posters to celebrate the team,” Garlinghouse said. “In the AP Art History class, students only made posters in the style of an artist on the AP exam. It was really a great bonding activity that got everyone jazzed for the game.”

With the Junior class retreat postponed and all classes for the day canceled, the game provides an organized way for all students and faculty to support the Knights.

“Today I saw, and still am seeing, everyone in our community, not only basketball fanatics, come together to support one of our teams,” Thiara said. “This game gives us the chance to look forward to something as an entire school and really shows what our community is like.”

Cheers and support from students and faculty have a great effect on the team, and if anything, increase their chances of winning the game, according according to Garlinghouse.

“I can’t wait to watch the game as essentially an entire school,” Larkin said. “I am really proud to be a part of a community that celebrates its school spirit like we do, and know our presence in the arena will only make the team better.”