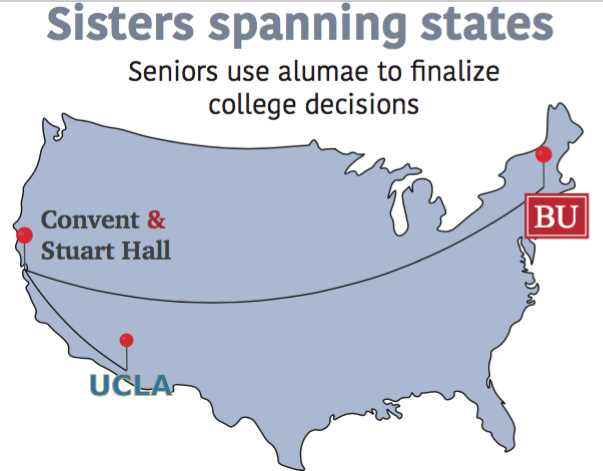 For seniors who were experiencing difficulty deciding between colleges, reaching out for direct help was as easy as sending a text or having a phone call with an alumna who was in the same position only a few years earlier.

“Grace reached out to me a couple months ago when she was deciding between a couple of colleges,” Madeline Ainslie ’15 said about senior Grace Lachman. “She had gotten into UCLA and wanted to see if we could meet up while she was visiting. At the time, I was actually going to be back in San Francisco, so we ended up just meeting up back on Fillmore Street in the old Convent stomping ground.”

College tours often only cover the basic information about an institution, so connecting with alumnae can be a way to gain a more insightful student perspective, according to Lachman.

“Maddie was someone I was kind of familiar with from Convent,” Lachman said. “Even though she was two years older, I was more familiar with her than some of the girls who went last year. I decided to Facebook message her and be like ‘Hey, I got in. I’m unsure, I don’t know a ton about the school and I’d love to just get your perspective on it.’”

Coming onto a campus — whether it be for a campus tour or an open house — and knowing somebody right away can help lessen the daunting feeling of being in an unfamiliar place with new people, according to senior Delaney Moslander.

“I reached out to Camilla [Bykhovsky ’15] two weeks before I went to the open house at Boston University and we decided to meet up,” Moslander said. “After the open house I met up with her and we walked the entire campus.”

Students considering colleges should not be afraid to reach out to Convent alumnae for advice because alumnae are often so excited at the thought of seeing a familiar face at their college and they are more than willing to impart advice and answer any questions, according to Bykhovsky.

“After she told me she was committed and coming here, I was super excited,” Bykhovsky said. “The things I wanted to show her were things I wish I’d seen as a freshman. When you come to a big school like BU, there are people everywhere and it’s really hard to find quiet places to study so I definitely wanted to show her some of those places.”

“She didn’t try to sugarcoat anything,” Lachman said about Ainslie’s insight on her college experience. “I had a big fear of coming from such a small school and such a close-knit community going into such a huge, public university. She was really able to help settle my fears on that end by telling me specific organizations I could join.”

Bykhovsky and Moslander will both attend the same college, Sargent College of Health and Rehabilitation Sciences, within Boston University.

“I wish I had somebody there to sort of guide me through classes and help me out, let me know which ones are hard, which ones I should take in what semester,” Bykhovsky said. “With Delaney being in Sargent and me being in Sargent, I can help her a lot because there’s some really hard classes you have to take which are required. Having somebody that already took them and knows the struggle is gonna be really helpful for her.”

Any alumna will be willing to speak to or help out another Convent student because of the unique educational experience they have in common, according to Ainslie.

“Grace and I never really knew each other in high school,” Ainslie said, “But I think what’s really great about Convent is you always feel comfortable enough reaching out to people and alumni from Convent, even if you weren’t necessarily that close to them in high school. I just think that really speaks to the connections you make at Convent and the strength of character Convent builds in their students.”